Child Migration, Child Labor and School Attainment. Evidence from the Bulgarian Community in Hungary (Late 19th to the 1930s)

Table 1. Number and proportion of the Bulgarians in Budapest, Pest-Pilis-Solt-Kiskun County and Hungary by Bulgarian mother tongue and age groups, 1900-1930 г.[6] 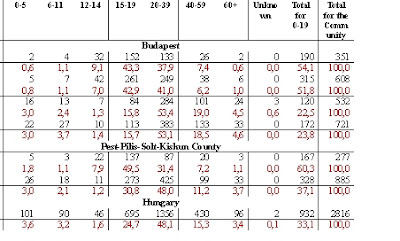 Fig. 1. Total number of students at the in , number of newly enrolled students and students that passed to the following grade by school years, 1917/18-1933/34. 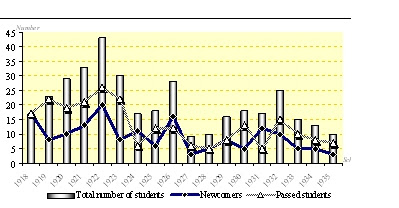 Usually, the number of newcomers did not exceed the one of the passed students. Exceptions were the school years of 1923/24, 1925/26 and 1930/31, because then the number of leavers was the highest. Especially critical were the school years of 1923/24, when two thirds of students in the grades did not continue their education and 1930/31, i.e. the second year of the global economic crisis when half of the passed students at the Elementary School did not continue schooling.
The dynamics of Junior High School attendance doubled by the school year of 1930/31 (Fig. 2), reaching its peak in 1935/36. There was an increased market-gardeners’ migration flow to Hungary in 1930s, which was triggered by the activities of the Bulgarian Gardeners’ Union in favor of the act on the encouragement of gardening (1934-1935) and the respective Regulations (1936)[21].


Fig. 2. Total number of students at the in , number of newcomers and students continuing their schooling from its Elementary to its Junior High by school years, 1927/28-1936/37. 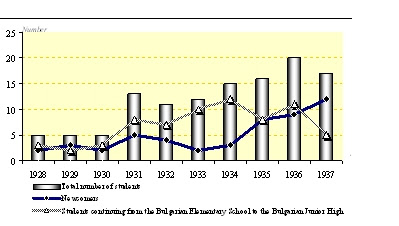 During the period of ten years 49% of the students enrolled at the Budapest Bulgarian Junior High School came from the Bulgarian Elementary School. Curves of the newcomers and of the students continuing from the Bulgarian Elementary are also oriented upward. Observing Fig. 2 it is noteworthy that at the Junior High School during the first three years of its existence there was almost an equal proportion between newcomers and students continuing from the elementary level. In the 1930s the number of newcomers was significantly lower than those who continued their studies. This trend changed essentially in 1936/37 when the number of newcomers at the Junior High was three times higher than the number of students continuing from the Elementary School.
As to gender distribution in both, Elementary School and Junior High the proportion and number of boys somewhat exceeded those of the girls’ (59%:41%) – no significant difference if we consider that the gender structure of the Budapest Bulgarian community was primary dominated by males.[22] Due to the significant presence of females in the age group of 6-14 year-olds, the proportion of girls at the Budapest Bulgarian School amounted to 41%: according to the Census of 1920, in Budapest within the age group of Bulgarian mother tongue 6-14 year-olds the proportion of males exceeded females only by 1,5:1 ratio, while in 1930 the number of s was lower than that of females with a ratio of 0,7:1. This phenomenon was characteristic only of this age group[23].
Ample evidence of the advanced views of the Budapest Bulgarians on the education girls, i.e. overcoming the patriarchal bias that education of girls was not needed, is provided by the desire of the Bulgarian community in Budapest to educate their female offsprings and not only in reading and writing but also in acquiring higher education, which quantified in the proportion of 24% of girls who studied at the Budapest Bulgarian Elementary School and then continued for the smaller share of 19% of boys.
During the first three school years of the Budapest Bulgarian Elementary School (which coincided with the end of World War I) girls were quite more than boys (Fig. 3): in the first school year - almost twice. This was because during the War, almost all Bulgarian market-gardeners were called in the army. By necessity vegetable gardens remained in the care of elderly men, women and children; boys, instead of going to school, did whatever they could to save the gardens. In the following years the difference between the sexes within the age group discussed was gradually decreasing and from 1920/21 onwards boys started prevailing; in fact this phenomenon corresponds with 1920 Census data for Budapest Bulgarian community by Bulgarian mother tongue, where the number of girls was higher in the age group of 4-11 year old boys.
Fig. 3. Number of students at the in by sex and school years, 1917/18-1933/34. 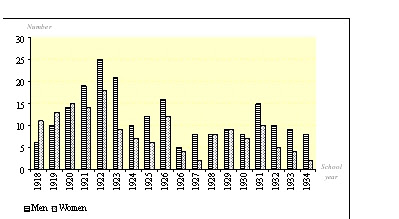 The dynamics of Junior High School attendance by sex (Fig. 4) differs from that of the Elementary School. Noticeable is the imbalance between men and women at the Junior High during the first year (no girls were enrolled) in 1930/31, (when the ratio of girls was exceedingly hiah) and in 1934/35 (when boys exceeded a lot). Female presence was strong at the Junior High in the period of 1931-1933, which was not uncommon: according to 1930 Census in the Bulgarian mother tongue population of Budapest the age group of 12-14-year olds (age of junior high school attendance) was dominated by women. 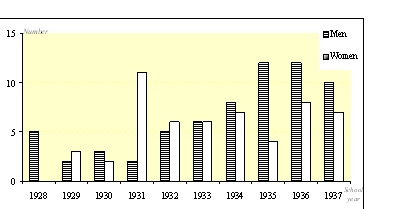 Bulgarian primary education of the period faced the problem that students were rarely able to finish the full seven-year course of compulsory education. The majority of them dropped out after the first or second year. As for the students of Bulgarian School in Budapest it is not possible to determine the relative share of those who passed successfully the full seven-year course of primary education for two main reasons. One is the high mobility of members of the Community - children constantly migrated with their parents from Bulgaria to Hungary and back. This was their way of life: market-gardeners spent a time in Hungary until they made a fortune, then came back to Bulgaria for a year or two, building a house and left for Hungary again. So, their children attended school where they just were at the very moment - either in Bulgaria in their home places or in Hungary at the Bulgarian school. Another reason is that there were children who attended Hungarian schools or moved from the Hungarian school to the Bulgarian one and vice versa. At the Bulgarian School in Budapest 17% are the children with no consistency in the passing from grade to grade starting from the second grade upwards (including those who continued at junior high school), i.e. they passed one or two grades, moved and studied somewhere else, then returned. That is why it is difficult to estimate the effectiveness of the educational activities of the Bulgarian School in Budapest.
The registers also give evidence of the mobility among students. Another question is how strict the teachers marked where a new student – applicant for an upper grade came from or why he had left his previous school or where a student of theirs moved to: from all the 161 children “passed” through the primary school, 132 finished one or two grades and only for 30 of them were recorded the reasons to leave the School. The most common reason to leave the school was relocation, but there was also a transfer to a Hungarian school, being “in poverty”, “disease”, death. Problem for the children of Bulgarian School was the fact that most of them had to combine learning and market-gardening. However, this was reflected in a single case of a girl: “left by lack of time” says the Register. Another difficulty impeding children to attend the Bulgarian school was remote location. As it is seen from the parents’ addresses the majority of students at the Elementary (76%) and Junior High (77%) lived in Budapest; 15% of the students at the Elementary and 9% of the students at the Junior High School lived in villages located in the belt around Budapest - these were the villages of Pestszenterzsébet, Rákoskeresztúr, Rákospalota, Rakosszentmihály, Pestszentlőrinc[24] and a little remote village of Tököl; only several students of the Elementary School were referred to more distant villages (such as Tokod in Komárom-Esztergom County and Gátér in Pest-Pilis-Solt-Kiskún County) as well as few students of the Junior High School (Ercsi and Érd in Fejér County and Miskolc in  Borsod County). Actually, all students who passed only one or several grades potentially could have continued their education in Bulgaria or at a Hungarian school. The School’s registers included five cases of transfer of students from schools in Bulgaria to the Budapest Bulgarian School.
Summarizing the information coming from the quantitative analysis of 1900, 1910, 1920 and 1930 Hungarian Census data on Budapest population by Bulgarian mother tongue and the data of the registers of the Bulgarian Elementary and Junior High School in Budapest we have come to the following conclusions:
Typical was the migration of children who left homeland with their market-gardening parents as a family or market-gardeners’ children who were born abroad. The foundation of the Bulgarian School in Budapest was instigated by the growth of the Bulgarian market-gardeners’ community in Hungary and Budapest. Because of its spatial dispersion in the Interwar period, the Bulgarian community in Hungary was naturally prone to integration and assimilation processes. However, these processes did not proceed for several reasons: firstly, because of the peculiar reticence and conservatism of the Bulgarian market-gardeners’ community, which constituted the bulk of the Bulgarian Diaspora in Hungary; secondly, because of the community’s affinity to preserve their own cultural traditions; thirdly, due to the arrival of newcomers and the continuous, live contact with the homeland; and fourthly, because of the proneness of the Hungarian authorities and society towards the Bulgarian market-gardeners who produced cheap and fresh vegetables to supply the industrially developing city’s population. More compact was the largest Bulgarian community in the country – the one living in Budapest, but it was exposed to more “integration” challenges, too. Thus, the community created for the first born Bulgarian generation in Budapest such a powerful ethnostabilizing factor as the Bulgarian school. In fact, the Bulgarian school in Budapest was attended by the children of those families who were residing there and the already prospered Bulgarian market-gardening and commercial elite. Quite visible is the positive effect of migration on the acquisition of education for the children in the Bulgarian community in Budapest, which is reflected in the fact that their attendance and the number of school-years spent at the Budapest Bulgarian School was higher compared to children educated in Bulgaria.

Table 2. Number of Bulgarians in according to mother tongue and geographic distribution, 1920-1990.


Table 4. Number and share of the working Bulgarians in according to citizenship (for 1930)/mother tongue (for 1990) and occupation.

Table 6. Number and share of Bulgarians in Hungary according to mother tongue, sex and the way they speak Bulgarian, 1990.

Table 7. Number and share of Bulgarians in according to mother tongue and languages spoken not as mother tongues, 1990.


Table 8. Number of population in above the age of 7 according to mother tongue and university graduation, 1990.